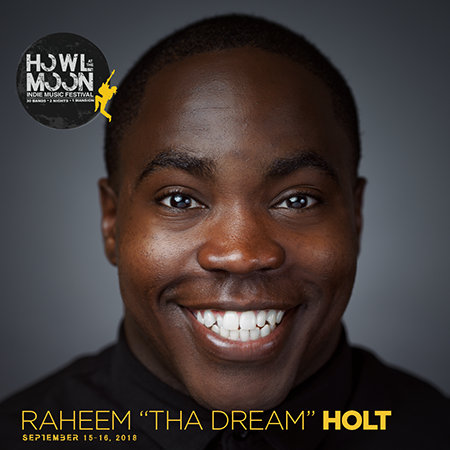 Raheem Holt, aka Raheem Tha Dream,  is a rising actor/comedian/host with tremendous
ambition, passion, and energy. Since moving to Nashville from Pulaski, Tennessee in
2014, he has made big waves in the entertainment space. His skit "I Got Robbed" went
viral reaching 4.5 million views across multiple content platforms.
Known for his larger-than-life personality, Raheem is quickly making a name for himself
locally and regionally in the Nashville area. With a strong resemblance to celebrity
comedian-actor Kevin Hart, Raheem is the next big thing.

A budding actor, Raheem has made appearances on commercials and television shows
aired on ABC, NBC, and FOX, plus many others. He has a Friday nights radio show “Wee
Battle” on 1470 WVOL-AM Nashville that features local artists’ interviews and Nashville
influencers. His Kevin Hart impersonations are a big hit and have featured on-air prank
calls for radio programs like the Dudley & Bob Show in Austin, Texas, successfully
stumping hosts and listeners. Raheem has also worked directly with the real comedian
and actor, Kevin Hart, as his stand-in for The Irresponsible Tour’s national commercials.
Plus, other regional and local commercials for companies like Check Into Cash and the
food & shopping app, NoDat.

Beyond the entertainment world, Raheem is a great community leader in his hometown.
He’s a member of the Above Average organization—young men and women giving back
to the community by mentoring kids and teaching them that anything is achievable, and
to be above average.

At the age of only 25, Raheem has already compiled a very impressive portfolio and also
works in the hospitality industry. He was named 2017 Young Leader of The Year by the
Greater Nashville Hospitality Association (GNHA), has received the Stars of The Industry
Awards, and was recently recognized by Nashville’s Convention & Visitors Corp. as a
2017 Music City Hitmaker, making him one of the youngest recipients ever to make an
impact in Nashville.